Carrie Conquers Ulcerative Colitis With SCD (and Regains Her Life)

Carrie conquered Ulcerative Colitis to regain her life and health just 1 year after 15 to 20 spells of diarrhea a day and being severely underweight. 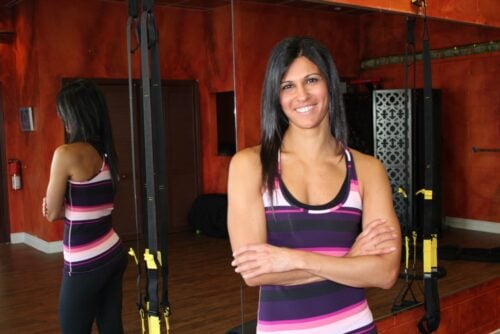 Struggling with Ulcerative Colitis and desperate, Carrie spent countless hours scouring the internet in hopes of finding answers from people she could relate to, hoping to find others who had successfully overcome digestive disease. When she discovered SCD’ers were becoming healthy and regaining their lives, she knew what she had to do…

Carrie is a Personal Trainer and the body she worked so hard to sculpt was literally wasting away. She told us that reading stories like How Jen Used Food to Overcome UC (in just 6 months) and Gabriel is a Med-Free Teenager After a Long Battle with Crohn’s Disease (and other similar stories) filled her with the hope she needed when she was at her lowest point… the point where she desperately needed to know she wasn’t going to wither away and die. If you’re not yet familiar with my story, I was in the same place back when my doctor told me to start SCD because he didn’t know what else to do. Sometimes, all it takes is one book or one other person’s success story to catapult us to new heights of health we never even dreamed of.

Instilling a sense of hope in others is the biggest reason we share these amazing stories with you and it’s an absolute honor to share Carrie’s with you today. Sometimes all we need is someone that has been where we are and succeeded, someone who’s been in our shoes and did it, to inspire us to take control of our health.

Today, I hope Carrie can be that inspiration for you…

It Wasn’t Too Pretty Just Over a Year Ago

In April 2013, I lay in a hospital bed hooked up to IVs with drugs running through me to help slow down the bleeding, pain and the excessive amount of bowel movements (diarrhea) I would have per day.

For about 12 years, I have dealt with stomach problems but never this bad. In my early twenties, I began to have bad pains and urgency to go to the bathroom, but with the elimination of dairy and wheat I felt great for a few years. Then, I had a baby and all hell broke loose.

Prior to being hospitalized, I spent a week in bed (or I should say a week in the bathroom and in my bed) very ill. I had severe pain in my abdomen and I’d run to the washroom approximately 20 times per day. I had blood in my stool for about five weeks prior to this but didn’t see anyone about it. I also had a high fever.

I Reached My Tipping Point

I finally decided after about a week of this that I better go to the emergency room at our local hospital and see what was going on. My husband took me over and they ran a bunch of tests. I was then scheduled in for a colonoscopy on that Thursday. Following the completion of the colonoscopy, the doctor came to me and told me that I would have to stay in the hospital for at least three days, as I had severe inflammation and ulcers covering my entire colon and diagnosed me with Ulcerative Colitis. I was beside myself.

Firstly, I hate, HATE hospitals so much that I opted to give birth to my daughter at home. Secondly, I couldn’t bear to be away from my almost two-year old daughter for three days, but I had no choice. I was hooked up to an IV that ran Prednisone through me. This was another humbling moment as I stay away from drugs like the plague (even Advil). I got through my few days at the hospital and then was sent home to fill a prescription of a course of Prednisone and Mazenet. I was told to take these drugs with food.

Of course, I had NO appetite. I had to force food down in order to take these drugs. I lost 28 pounds within a couple of weeks (weight I couldn’t afford to lose). My family and friends were shocked when they saw me. I’m a Personal Trainer, and normally strong looking, so to look at myself in this condition wasn’t easy. My previously toned arms looked like pipe cleaners and my normally thicker thighs looked like pencils. My butt, oh my butt, had vanished completely.

Three weeks later, I had an appointment with the surgeon who performed the colonoscopy. At this point, I was still very ill and experiencing awful side effects, which I later found out were from the Mazenet drugs. The doctor seemed shocked that my progress wasn’t any better. Yes, the blood stopped, but I was still going to the bathroom 10-15 times per day even with the drugs. I still hadn’t heard from the Gastroenterologist for a follow-up appointment and I was told it could be months before I would hear anything. So, I was pretty much on my own to fend for myself.

Thankfully, I have been studying nutrition for a long time and have been dealing with my naturopath for years on my digestive issues, so I was pretty good at trying to figure out what (and what not) to eat. But I wasn’t doing good enough, as I was still having way too many bowel movements per day. In a conversation with my Naturopath, she mentioned the SCD diet and asked if I had ever heard of it. I hadn’t, but I went straight home and did as much research on it as possible. It was worth a shot. Anything that gave me hope was worth a shot. At the time, my daughter was just a two-year-old and not being able to play with her was eating away at me. My husband works in Ohio five days per week and we live in Canada, so my parents and other family members would come over to help me and entertain my daughter during the week. On the weekends, my husband would thankfully be home with my daughter so I could lay in bed.

I began the SCD diet at the beginning of April and started with the Intro Diet, which I found on pecanbread.com. I have to say, within a week the number of BMs per day slowed right down to half of what I was having. Then, within a couple of weeks I was only having two to three BMs per day. I felt so much better, but I was still experiencing bad side effects from one of the drugs I was on. So, my doctor told me to cut the dose in half, which helped a little.

I took the bull by the horns, so to speak, and followed the SCD to a T. I made the yogurt, the broth, the patties…everything! I even became a little obsessed over it all for a while. It definitely wasn’t easy in the beginning and consumed every spare moment I had. However, the choice was simple: choose to become healthy again and be there for my daughter or not. I chose health.

Within three months, the course of Prednisone was complete. At this time, I decided that since I was feeling good and gained some weight back I was going to kick the drugs completely. I wanted to see if I could manage just by following the SCD diet and it worked!

Here are my before and after pictures: 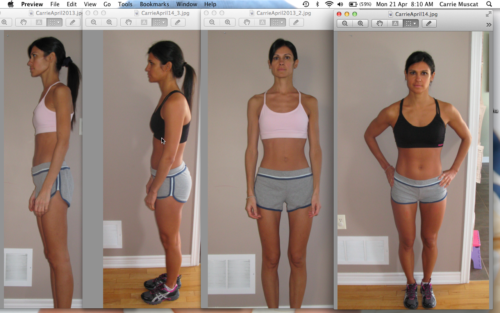 Within a year, I gained back the 28 pounds I lost, began to strength train regularly again and I am probably in better shape now than I was before I got sick. I am med-free and have mostly normal bowel movements again. I cannot believe that just over a year ago I thought I was going to die (and looked like it too). Now I feel and look pretty great!

I will continue to follow the SCD diet, as it not only keeps my bowels feeling pretty good but I also noticed my joint pain disappeared (as well as my Rosacea).

Planning to Give Back

I will soon receive my degree as a Registered Holistic Nutritionist and plan on helping people with digestive disorders maintain good health through their diet and following SCD.

Thanks for all of your help Jordan and Steve. I’ve learned so much by following you two on Facebook and receiving your emails with constant tips and videos.

Thank you so much for sharing your story Carrie! I know your story is going to help so many others struggling with Ulcerative Colitis.

If you’re reading this and would like more help using food to heal like Carrie did, our step-by-step book can help you get started on SCD: http://scdlifestylebook.com

Jordan Reasoner is a health engineer and author. He was diagnosed with celiac disease in 2007 and almost gave up hope when a gluten-free diet didn’t work. Since then, he transformed his health using the SCD Diet and started HealthyGut.com to help others naturally heal stomach problems. You can check out his story here and find him on Google+, Facebook or Twitter.

3 Reasons Your Adrenal Fatigue Program Isn’t Working (and What to Do About It)
Next Post: 4 Mind Traps That Cause Us to Cheat on Our Diets (and How to Beat Them)

This article is based on scientific evidence, written by experts and fact checked by experts. Our team of licensed nutritionists and dietitians strive to be objective, unbiased, honest and to present both sides of the argument. This article contains scientific references. The numbers in the parentheses (1, 2, 3) are clickable links to peer-reviewed scientific papers.